Does Smoking Increase My Risk of Colon Cancer? 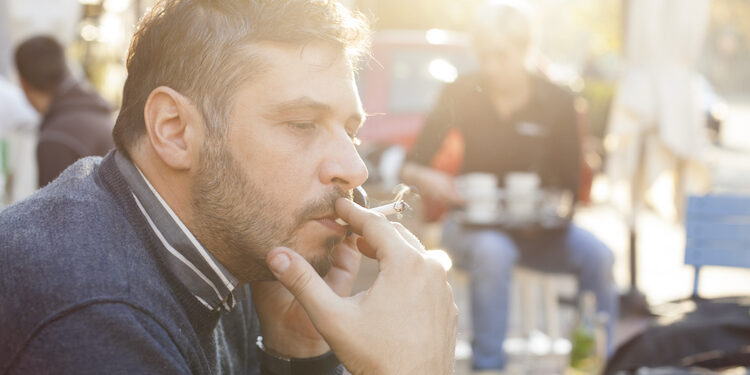 A single cigarette contains more than 4,000 chemicals and 50 cancer-causing agents, as well as many poisonous toxins. Smoking cigarettes is well known as a leading cause of lung cancer, but it also increases your risk of at least 17 other types of cancer, including colon cancer. In fact, it puts you at greater risk of heart disease, stroke, abdominal aneurysm, narrowing of the arteries, chronic bronchitis and emphysema.

Cigarettes interfere with the normal processes of cell repair and replacement in your body. When you inhale the carcinogens in cigarette smoke it causes damage to the cells in the body. Over time the body is no longer able to repair this damage. The risk of cancer rises as the body becomes less and less able to repair damage and the number of damaged cells increase.

Damaged cells are called free radicals. Free radicals are missing a crucial molecule which causes them to seek to pair with another cell. In the process, however, they may damage the cell’s DNA. This sets in place a series of mutations which can lead the cells to begin reproducing rapidly. This is how cancer and heart disease starts.

Free radicals can lead to development of polyps, which are growths in the large intestine that can become cancerous over time. Smoking is also linked to a more aggressive form of polyp called flat ademonas which are far harder to detect than ordinary polyps and so may put you at greater risk of developing cancer.

Smoking not only increases your risk of developing colon cancer but it also makes you more likely to die from the disease than non-smokers. Research shows that someone who has smoked has a 23% greater chance of dying from bowel cancer or recurrence of the disease after colon surgery. If you were a smoker at the time of being diagnosed with colon cancer you are 47% more likely to die from the disease or experience a recurrence after surgery.

Experts suggest that smoking puts you at equal risk to someone who has a first degree relative (mother, father, child or sibling) with bowel cancer.

What you can do

If you are a smoker, the best thing you can do to reduce your risk of bowel cancer is to give up. While it can be tough to quit, the health benefits are enormous and there are many excellent support services to help you including the NHS’ highly regarded Smokefree service.

Giving up smoking no matter how old you are will decrease your risk of colon cancer, although the biggest benefits will be seen among people in their 20s because there is often a 30-year gap between smoking and the onset of cancer.

Regular screening is recommended for people who are at high risk of colon cancer, including smokers. While the NHS offers routine screening for people aged 55 and over in England and Wales, you may need to undergo private screening if you are younger and worried that you are at risk due to smoking, or if you would prefer a colonscopy rather than the standard FIT test.

The benefit of private screening is that it can be done at a time and location to suit you and you will be given a colonscopy which is the most thorough type of screening, that involves looking inside your bowel and large intestine using a colonoscope.